Wild Rift is easily one of the most anticipated games that the mobile gaming community are excited for. Riot Games announced this exciting title last year in celebration of their 10 year anniversary for their popular MOBA game, League of Legends. The mobile version, League of Legends: Wild Rift, will be similar to the one found on PC but was rebuilt with mobile in mind while also adding a new map to the game. For those that are not familiar with the gameplay style, it is a 5v5 MOBA that pioneered the genre a decade ago.

If you watched the most recent Apple Event when the iPhone 12 was unveiled then you probably saw Wild Rift being demonstrated during this event. It was refreshing to see it running on the new powerful iPhone device. The developers have also talked more about what comes next for this game. Now we know that there is a regional open beta starting October 27th in Indonesia, Japan, Malaysia, Philippines, Singapore, South Korea, and Thailand.

The open beta will be available for regions like Europe, Middle East, Turkey, Russia, Oceania, Vietnam, and Taiwan in December of this year. It is expected to be available to North and South America in Spring of 2021. So we should be able to see more of it this year and and we can estimate that the global launch would be next year.

The devs will also roll out a test phase for six new champions who will be released fully at a later date. They will be free to play starting October 22nd until the 27th in order for player to provide feedback on them. These champions are: Akali, Darius, Draven, Evelynn, Kai’Sa, and Seraphine.

Furthermore, there will be 40 champions from the PC version and more characters that will be added later on. Wild Rift will not be able to cross-play with the original League of Legends found on PC due to various differences in functionality. Each match in Wild Rift is designed to last approximately 15 to 18 minutes since its targeting a mobile audience. 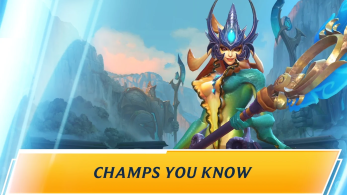 We previously mentioned that the minimum specs required for Android devices to run the game when it’s launched is 1.5GB RAM, a Qualcomm Snapdragon 410 Processor and an Adreno 306 GPU. They are also working to support 32-bit Android processors. As for iOS devices, the game should be able to run on the iPhone 6 or later devices. As of now, Riot Games have raised the minimum requirements for the Alpha testing period and they remain committed to make the game available to the widest range of devices possible.

Finally, since League of Legends is the biggest eSports title in the world, having its mobile counterpart is a great addition to the mobile esports industry. We are more than excited for this game, be sure to stay updated with our website for the latest news covering Wild Rift. You can watch the gameplay reveal video below.